Through the powers vested in the British Columbia Architects Act, the Architectural Institute of B.C. was incorporated in April 1920. An annual meeting was held that same year, making May 6, 2019, the AIBC’s 100th Annual Meeting. This significant milestone kicked off the AIBC’s centenary year.

For the past 100 years, the AIBC has regulated the profession of architecture in British Columbia.

But what exactly does it mean “to regulate”? It means the AIBC ensures that, in the interest of the public, entry competencies and practice standards of the profession are established, maintained, and upheld. As with doctors, lawyers and many other licensed professionals who need to meet strict standards to practice, the same is true of architects.

The AIBC regulates the profession through providing services and programs that fall under the four pillars of regulation: registration & licensing; professional development; professional conduct & illegal practice; and public outreach.

We invite you to learn more about the AIBC – including a full overview of what we do and the services we provide – here.

Facts About B.C. Architecture and Self-Regulation

Over the past 100 years, there have been many milestones in the regulation of the profession of architecture in B.C., as well as for the architectural community as a whole – the AIBC 100 timeline highlights some of these significant events.

On the first Thursday of each month, a new decade of facts will be unveiled in the timeline – by May 2020, we will have all 10 shared! Come with us as we explore both the province’s rich architectural history, as well as the AIBC’s past, present and future.

This year’s Annual Report features a commemorative design and historical facts of interest from the last 100 years of regulation. Download a PDF. 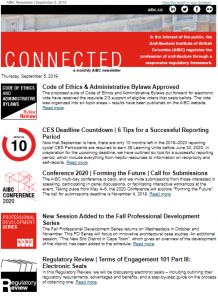 Stay in the loop! Sign up for the AIBC’s monthly newsletter, Connected.

Connected is the official e-newsletter of the Architectural Institute of British Columbia. Published on the first Thursday of every month, Connected provides information on Institute happenings, regulatory updates, volunteer opportunities, events, programs and courses, as well as industry news. If you would like to start receiving Connected, email communications@aibc.ca.

For any questions about the AIBC centenary or for more information, please contact AIBC Communications.